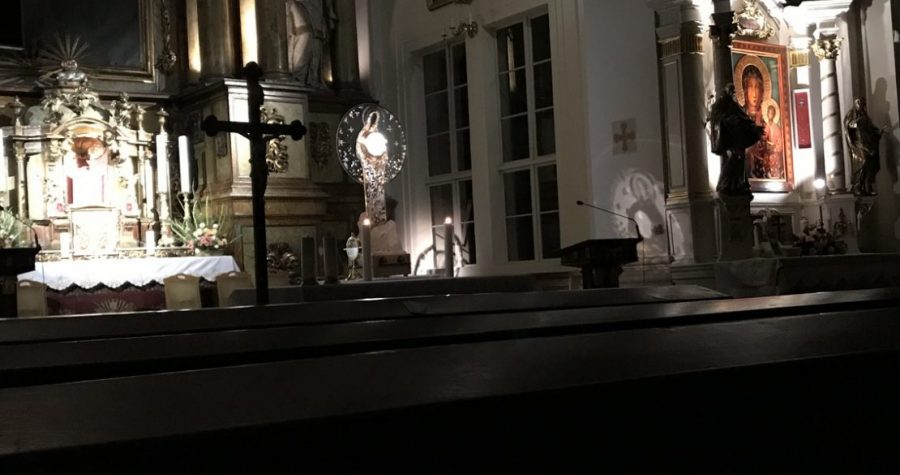 We invite you to join the New Year’s Adoration for Peace which is already held in the Shrine of Our Lady of Jasna Góra in Wrocław (Parish of St. Mikołaj, ul. św. Antoniego 30 – Pauline Fathers Parish).

Today, 31 December 2019 prayer for peace will be held until midnight (at midnight Holy Mass will be celebrated to welcome the New Year) and tomorrow, 1 January 2020 the adoration will be held from 1 p.m. until 9 p.m.

You are most welcome! 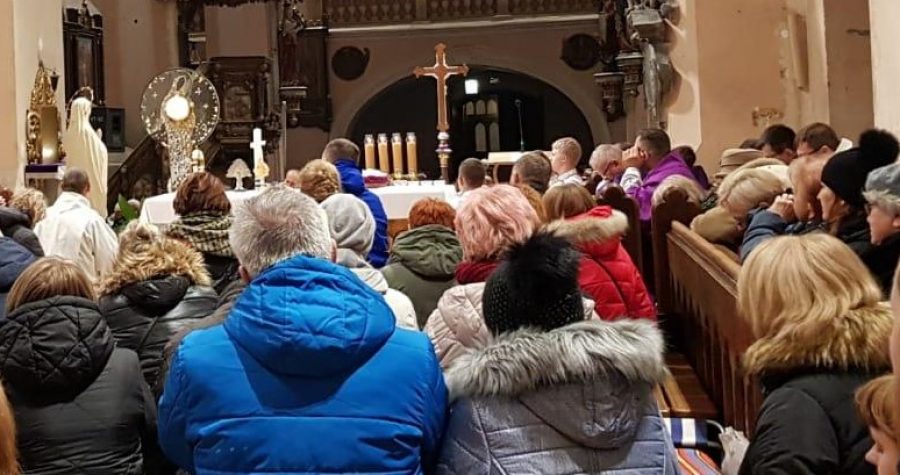 Peregrination of “The Queen of Peace” – Ząbkowice Śląskie

You can join in prayer for peace there until the end of January 2020! 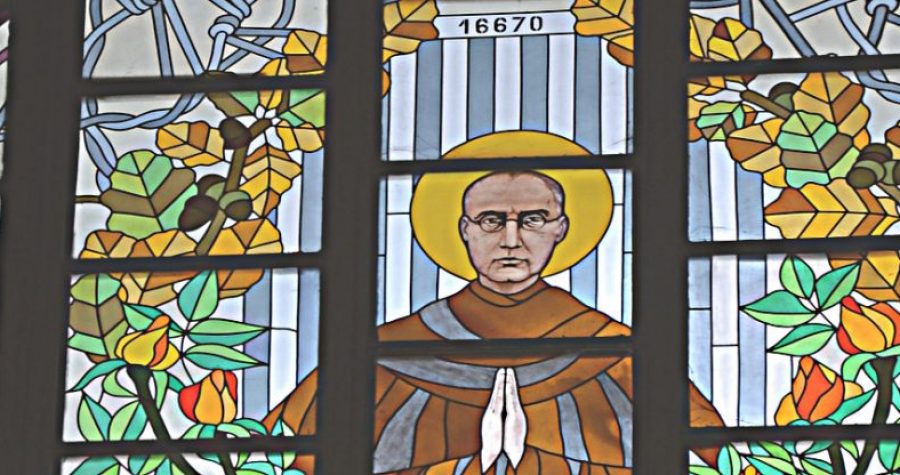 Peregrination of “The Queen of Peace” – Józefów near Warsaw

The Adoration of the Blessed Sacrament in the monstrance „The Queen of Peace” continues.

We invite you wholeheartedly to join in prayer for peace in the Parish of St. Maximilian Maria Kolbe in Józefów near Warsaw until 25 November.

The address is: 34 Malinowskiego Street. 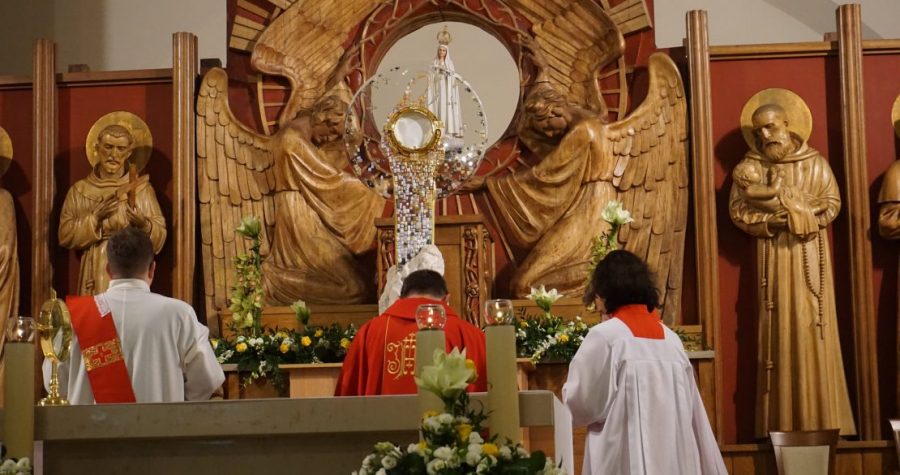 Peregrination of “The Queen of Peace” – Warsaw

From Radom, the Monstrance went to the capital city of Poland, Warsaw.

The first stop on the peregrination route is the Church of St. Felix of Cantalice where the Adoration was inaugurated on 28 October 2019 and it will last until 11 November.

This event was graced with the testimony of Mr. Mariusz Drapikowski from Gdansk, the author of the Monstrance. 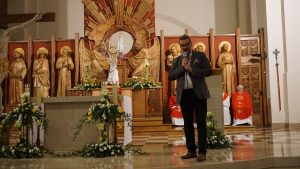 The whole-day adoration started thus, is the longest period of the Exposition of the Blessed Sacrament in the Parish.

The Parish is located in Marysin Wawerski and you are still most welcome to join the Eucharistic Adoration there. 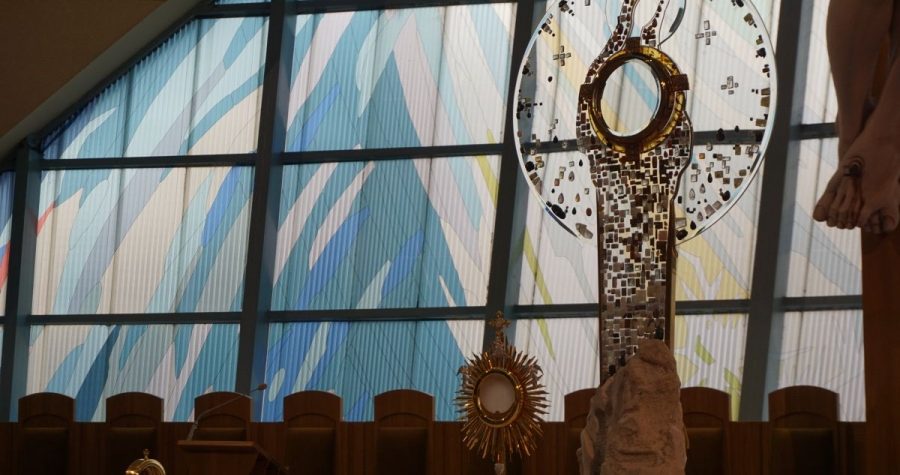 Peregrination of “The Queen of Peace” – Radom

The Monstrance moved from Wroclaw to Radom, the seat of „Comunità Regina della Pace” Association.

The Adoration of the Blessed Sacrament for Peace lasted there two weeks, from mid October until the end of the month. It was held in the Church of the Oratorians where our Ecclesiastical Assistant is stationed at present.

The solemn inauguration took place on 11 October 2019. It began with the celebration of the Holy Mass, afterwards the author of the Monstrance, Mr. Mariusz Drapikowski gave his testimony of his life at the side of Our Lady.

Subsequently, the Eucharistic Adoration was inaugurated by HE Bishop Peter Turzynski from Radom.

We are greatful to all who attended the Adoration to pray for peace in human hearts and in the whole world.  God bless you! 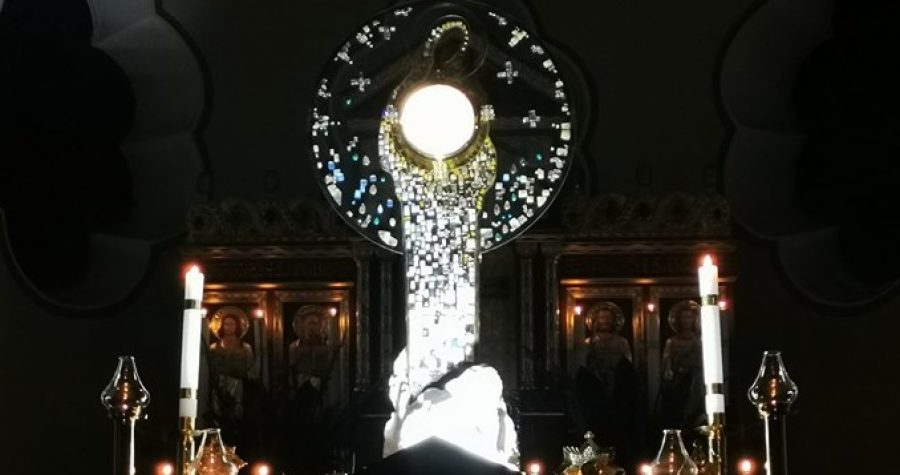 Peregrination of “The Queen of Peace” – Wroclaw

Photo: fb Parish of St. George the Martyr and the Exultation of the Holy Cross in Wroclaw-Brochow.

It is our joy to inform that the solemnly inaugurated at Jasna Góra Shrine peregrination of „The Queen of Peace” Monstrance, continues…

The first stop on the peregrination route was the capital of Lower Silesia Region, Wroclaw,  where the Adoration for Peace in the World was held from mid-September until mid-October.

“The Queen of Peace” visited there several parishes.

Firstly, the Parish of St. George the Martyr and the Exultation of the Holy Cross (photo above).

Afterwards, it peregrinated to the Cathedral of Wroclaw 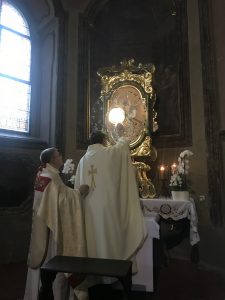 and to the Wroclaw Shrine of Our Lady of Jasna Góra cared for by the Pauline Fathers.

An exceptional event on the peregrination route was the prayer meeting organised by the students gathering in one of the Wroclaw students’ communities. The meeting was called „For a good start” (since it coincided with the beginning of the academic year – beginning of October in Poland).

Last but not least, “The Queen of Peace” visited the Franciscan church of St. Albert the Great where the Franciscan Fathers declared their desire to set up the chapel of Eucharistic Adoration… God willing, it will come true one day…