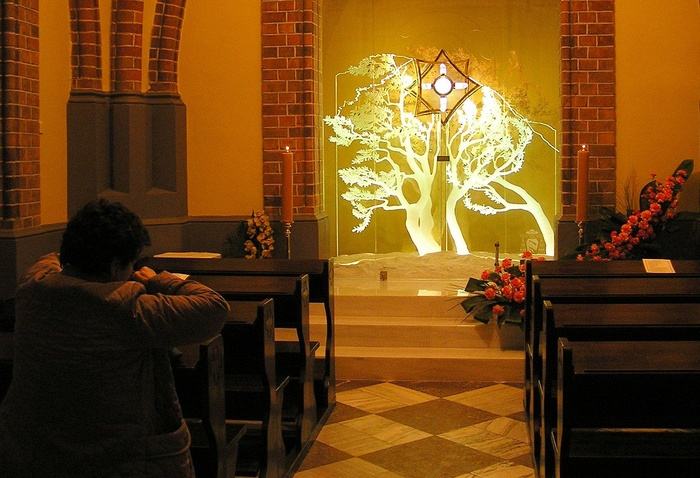 (Message of St. John Paul II for the 41st World Day of Prayer for Vocations, 2 May 2004, Fourth Sunday of Easter)

It is our desire that an intercessory Mary’s Mantle be spread over Poland, Europe and the whole world. Symbolic “stars” on this Mantle are the chapels, where Adoration of the Blessed Sacrament is held for peace in the societies where we live. We are convinced that prayer is the most efficacious weapon in the spiritual combat for peace.

“The 12 Stars in the Crown of Mary Queen of Peace” are places set up as centers of Adoration of the Blessed Sacrament which radiate spiritually. Its number is limited and they are created in all continents so that the prayer for peace may embrace the whole world.

There are numerous parish communities where there are those who wish to adore Eucharistic Christ. Therefore, we set up chapels of Adoration of the Blessed Sacrament in many churches, where prayer for this intention is being offered. “Through adoration, the Christian mysteriously contributes to the radical transformation of the world and to the sowing of the Gospel” (Letter of St. John Paul II to the Bishop Albert Houssiau of Liege, Belgium, on the 750th Anniversary of the Feast of Corpus Christi, 28 May 1996).

For the places where such yearning arises, a space of “sacrum” or a monstrance are designed in order to foster prayer in human hearts, and where the Lord hidden in the Eucharist is being adored.

So far several dozens of “The Stars on Mary’s Mantle” have been set up.