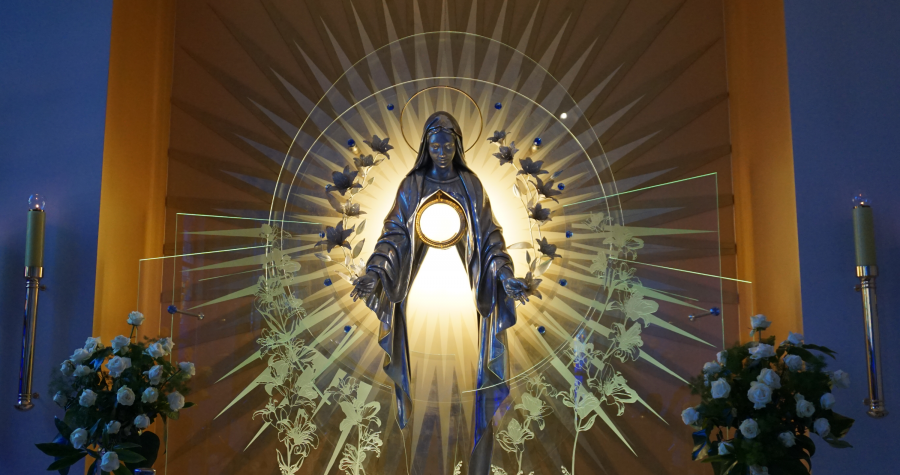 The perpetual adoration chapel of Niepokalanów, currently the world’s most-watched online adoration, is a source of peace and forgiveness for those deprived of Masses and confession by the coronavirus crisis.

In the wake of the COVID-19 pandemic and its subsequent quarantine period that induced many countries to suspend all public celebrations, including Catholic Masses, live broadcasts on social media have offered a source of comfort for countless faithful worldwide.

Beyond live broadcast Masses, eucharistic adoration and other online devotions have also become very popular channels for meditation and prayer. The extraordinary exposition of the Shroud of Turin for Holy Saturday, April 11, gathered a large group of participants from around the world, and chapels offering livestream perpetual adoration of the Blessed Sacrament are experiencing a pronounced increase in their traffic.

The perpetual adoration chapel of the Center of Prayer for Peace in the Niepokalanów Monastery in Teresin, Poland — which is currently the world’s most-watched adoration — has experienced a five- to ten-fold increase in traffic since the beginning of the lockdown period.

Inaugurated Sept. 1, 2018, the chapel housed in the Basilica of Saint Mary Immaculate in the Franciscan monastery founded by St. Maximilian Kolbe, in 1927, offers a 24/7 adoration that is broadcast live on EWTN Poland’s YouTube channel.

From an average of 200,000 online visits each month before the coronavirus crisis, the traffic has increased to about 1 million visits over the last month, with a range of 30,000 to 90,000 daily viewers, most of whom are from Poland, the U.S., and Brazil. The signal is also broadcast on Catholic TV stations in Italy, Germany and Lebanon.

The chapel’s popularity is not only virtual, however, as the chapel, located about 25 miles away from Warsaw, received over 350,000 entries onsite over its first year of existence.

A Place Chosen by the Immaculate

“The chapel is always full and it is a real grace which constantly astonishes us,” Father Wiesław Pyzio, Minister Provincial of the Warsaw Province of the Conventual Franciscan Friars, told the Register, recalling that Niepokalanów is also called “the City of the Immaculate Mother of God.”

“If this place is growing,” he said, “it is only because it was chosen by the Immaculate. It is her property.”

The project was developed and built on the basis of a wish that St. Maximilian Kolbe expressed in a 1937 letter, in which he had envisioned a chapel with a large statue of the Immaculate with open arms and a luminous heart.

According to Father Pyzio, two reported miracles have already occurred since the opening of the adoration chapel a year and a half ago.

The first is the inexplicable cure of a family man who was supposed to undergo a surgical procedure after being left paralyzed in an accident. “He came to the chapel to pray on a Sunday, two days before the surgery, and he was healed before going to the hospital,” Father Pyzio said. “The doctor who had to perform the surgery recognized his inexplicable cure.

The second reported miracle is the reconciliation of a mother and her daughter, who hadn’t spoken for two decades. “The mother connected to our chapel through the internet, asking the Virgin Mary to help her make peace with her daughter and a few days later, her daughter suddenly called her, after 20 years of silence, and they could rebuild their relationship.”

Apostle of the Desire of Salvation

One of the reasons why livestream adorations are so successful is that they can be a channel through which the faithful can gain a plenary indulgence for their sins during the pandemic, as confession was suspended along with Masses. Indeed, eucharistic adoration is mentioned among the different ways to obtain special indulgences in the March 20 decree issued by the Apostolic Penitentiary, together with other practices like the recitation of the Holy Rosary or the reading the Holy Scriptures for at least a half-hour.

And the Chapel of Niepokalanów is made an even more powerful channel for forgiveness by the fact that it is one of the few official places where plenary indulgences can be gained on a specific date, as with the Portiuncula of Assisi. On any day during a seven-year period that commenced Feb. 5, 2019, a plenary indulgence can be gained via the chapel by any Catholic who fulfills the necessary conditions. “The faithful can gain indulgences through a physical visit to the chapel or through a connection to our livestream,” Father Pyzio said, adding that every day, the Franciscan friars of the monastery pray for several hours at the chapel, asking for the plenary indulgence for the souls of the purgatory.

According to the Franciscan friar, such a concern for the salvation of human souls was at the heart of St. Maximilian Kolbe’s apostolate. “He was an apostle of the desire of salvation for all and this is why he wanted to go around the world so much — to gain new souls for salvation, through the Virgin Mary,” Father Pyzio said, highlighting the fact that even though the friars no longer go on missions abroad, they still maintain the same spirit as they keep saving souls through the indulgences that the Church has been granting.

“St. Maximilian, who spent months in the Auschwitz concentration camp, knew better than anyone that we can travel through the spirit, that our heart can travel to infinity,” he added. At a time when it is “impossible to physically participate in the Eucharist, one can unite to the Lord from home, and it is even better if it is before a virtual image of the Blessed Sacrament. It is the desire to be before God that matters the most.”

Solène Tadié Solène Tadié is the Europe Correspondent for the National Catholic Register. She is French-Swiss and grew up in Paris. After graduating from Roma III University with a degree in journalism, she began reporting on Rome and the Vatican for Aleteia. She joined L’Osservatore Romano in 2015, where she successively worked for the French section and the Cultural pages of the Italian daily newspaper. She has also collaborated with several French-speaking Catholic media organizations. Solène has a bachelor’s degree in philosophy from the Pontifical University of Saint Thomas Aquinas, and recently translated in French (for Editions Salvator) Defending the Free Market: The Moral Case for a Free Economy by the Acton Institute’s Fr. Robert Sirico.