Adoring Christ With Mary: Eucharistic Devotion and the Mother of God 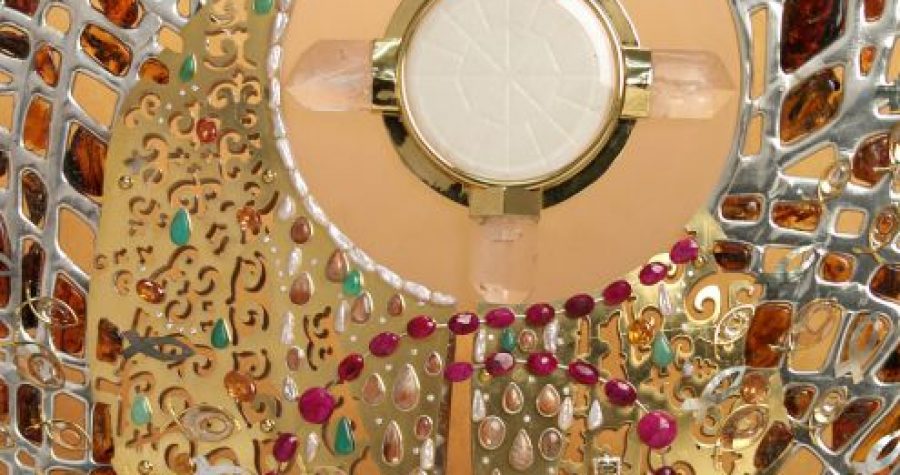 Inspired by the teachings of Sts. John Paul II and Maximilian Kolbe, two Catholics from Poland have launched a new initiative on all the continents aiming to bring perpetual adoration of the Blessed Sacrament for the intention of world peace across the globe.

The “Stars in the Crown of Mary, Queen of Peace” initiative is the brainchild of sculptor Mariusz Drapikowski and Piotr Ciołkiewicz, president of the Comunità Regina della Pace (Queen of Peace Community), an international apostolate established in 2008 to encourage adoration of the Eucharist for world peace and reconciliation between peoples.

Shortly after the apostolate was registered, its representatives had an audience with Pope Benedict XVI, who gave his blessing to the initiative. The 12 stars in the name refer to “the crown of 12 stars” on Mary’s head mentioned in the Book of Revelation. The monstrance in each of the eight existing centers for perpetual adoration refers to this image of Mary; Drapikowski Studio, a workshop run by the father-and-son team of Mariusz and Kamil Drapikowski, designed all the monstrances. “Our inspiration for designing these monstrances comes from reading sacred Scripture and the exegesis of St. John Paul II and Benedict,” Mariusz Drapikowski told the Register, adding that when Drapikowski Studio was in the process of designing monstrances, 2,000 Masses around the world were celebrated for this intention.

“He who brings peace is Christ,” Drapikowski added. “Peace has to begin at the level of the relationship between man and Christ, whom we encounter during adoration.”

The eight existing “stars” in the Crown of Mary, Queen of Peace are found in areas that have been ravaged by conflict, bringing adoration to those in particular need.

The first center was opened in Jerusalem, but has since been moved to the Chapel of the Milk Grotto in Bethlehem. The second center of perpetual adoration for peace to be opened was in the Sanctuary of Our Lady, Queen of Peace in Ozernoye, Kazakhstan, near the geographic center of the Eurasian landmass and the site of the suffering of many peoples under Josef Stalin. Asia’s second center is being built in Dagupan in the Philippines, a country currently ravaged by terrorist attacks sponsored by the Islamic State.

Last year an adoration center opened in Namyang, South Korea. The Namyang Center of Prayer for Peace was opened after Drapikowski and Ciołkiewicz heard of Korean pilgrims in Medjugorje walking up the Cross Mountain on their knees to pray for the reconciliation of their nation. The Korean center took on a more concrete shape later, when Michał Rzepka, a Pole who lives in South Korea, and his Korean wife, Agnes, supported this initiative. Several months later, the world was surprised as the leaders of North Korea began talks with their peers in South Korea and the United States. According to Drapikowski, Father Francis Xavier Lee Sang Gak, the custodian of the Namyang prayer center, is convinced that the North’s slow opening to the world is related to the perpetual adoration set in motion in 2017.

Like the Koran Peninsula, Africa continues to be a land marked by conflict, and both African Centers of Prayer for Peace were established in sites of great human suffering. The first is in Kibeho, Rwanda, the site of Marian apparitions in the 1980s and the place where the horrors of the 1994 Rwandan genocide occurred.

The altar in the Kibeho Center of Prayer for Peace, constructed in Drapikowski Studio in Gdansk, Poland, like all the other altars,  has been traveling the world; in 2016, it was blessed by Pope Francis during World Youth Day in Krakow, Poland. For the next year and a half, the altar traveled to shrines across Europe.

The other African “star” is in the Basilica of Our Lady of Peace in Yamoussoukro, Ivory Coast; the basilica is the world’s largest Christian place of worship. The Ivory Coast was the site of civil war between the north, held by Muslim rebels, and the Christian government-ruled south from 2002 to 2007 and 2010 to 2011. Meanwhile, the first European prayer center was in St. James Church in Medjugorje, Bosnia and Herzegovina, which in the 1990s was in the very center of the fratricidal ethnic cleansing that marked the collapse of the Yugoslavian state.

The second European center was opened in the basilica in Niepokalanów on Sept. 1 of this year, the 79th anniversary of the invasion of Poland by Nazi Germany, which led to the outbreak of World War II.

Niepokalanów is just outside Warsaw, which suffered more than any other city during World War II, with 85% of its buildings destroyed and most of its inhabitants killed or displaced.

An event that can be described as a likely miracle coincided with the building of the chapel of perpetual adoration for world peace in Niepokalanów. As the chapel was being built, the friars asked Niepokalanów’s archivist, Sister Annamaria Mix, to dig up archival materials related to the building of the basilica. She found a letter by St. Maximilian Kolbe written in Nagasaki, Japan, in 1934. In it, the future martyr wrote: “I envision a beautiful figure of the Immaculate amid a great altar. Behind her outstretched arms in the background there is a monstrance, in which the Most Blessed Sacrament is constantly displayed. Friars will adore it all the time. Those who will look inside the church, inside the ‘basilica,’ will fall on their knees, adore the Eucharist, and look at the face of the Immaculate, who along with Jesus will work on fulfilling what they have asked for.” Although they were unaware of St. Maximilian’s letter, Drapikowski Studio designed a chapel very similar to what the latter had envisioned: On the altar in the chapel is a figure of Mary with outstretched hands, and underneath her heart, the Eucharist is perpetually displayed for adoration.

In the Drapikowskis’ chapel, the Niepokalanów altar is made of gold, silver and crystal. A silver figure of Mary herself serves as a monstrance for a shining Host. The figure will be surrounded by a wreath of silver lilies, which, along with sunshine, will create a golden glow. Drapikowski added that calling the shrine in Niepokalanów a “basilica” was a prophecy of St. Maximilian, because St. John Paul II elevated it to the status of a basilica decades later.

“No photograph can reproduce the beauty of this place and God’s presence, which you can experience there,” Franciscan Father Andrzej Sasiak, of the parish in Niepokalanów, told the Register. “When I walk into the chapel, it is as if God were touching me.”

Drapikowski says that there are plans to open two centers of perpetual prayer for peace in the Americas and two in Oceania (in Australia and Papua New Guinea). “We have many such testimonies from many of these places,” said Drapikowski of the tangible fruits of this international perpetual adoration for peace. “Apart from the Korean breakthrough, many miraculous healings have occurred after prayers in these centers.”

“For me, adoration is a time when I can deepen my personal relationship with God. It is at the center of my life,” Ciołkiewicz said. “Adoration is a time when I engage in dialogue with God. I feel that wherever Christ is present in the Eucharist, Mary is present, as well. She is my guide. Adoration is the source of my inner peace, and so it can also bring peace between people at conflict with one another. Adoration is like a lighthouse that sends a signal inviting us to a safe place in a stormy, hostile world.”